I have been to Asia many times. Since I wrote a blog post about each country we visited in South East Asia here a short overiew. I wrote about places worth to visit, where we bought our food, where we slept, how we travelled from place to place, costs, when it is best to visit, visa, and other interesting facts. If you want to read more about a country just click on the country.

In Bali I felt an incredibly strong, positive energy. The last time I felt such energy was in Ko Phangan. 90% of Balinese are Hindu and most believe in Karma. The people are very warm-hearted and smile a lot. Even though Bali became a huge tourist destination in the past few years and changed a lot, the Balinese keep practicing their colourful and rich culture. I admire their daily tradition of little offerings called canang sari with flowers, rice, and incense sticks. There are thousands of them which makes the air permeated by the smell of incenses. This tiny island is so different from the rest of Indonesia where the majority is Muslims. You can visit temples, many beautiful waterfalls, rice terraces, and sandy beaches. Plus it is a dream for healthy vegetarians, vegans and raw foodies. More about my food experience here. And the strong internet attracts a lot of digital nomads who call Bali their home. 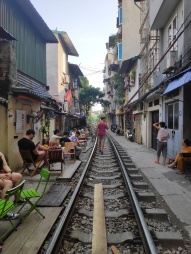 We spend two months (September and October) in this beautiful country. Although Vietnam remains officially committed to socialism, its economy is capitalist. The mountain area in Vietnam is colder and beautiful. A big part of the land is used for agriculture. Coffee farming was introduced by the French colonial rulers. The French also established the still existing train line, developed a Western-style system of modern education, had a beautiful influence on the architecture, and propagated Catholicism widely. Less than 10% are still catholic today. Also the Chinese left their influence in architecture and food (e.g. hot pot). 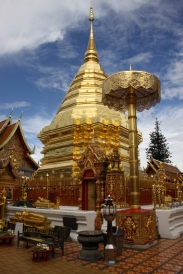 Amazing food, beautiful beaches, massages, cheap, rich cultur, safe, tropical fruits, smiling people, and sun are only a few things I love about Thailand. The first time I visited Thailand was in June / July 2012 for three weeks with one of my best friends. Then again in 2015 by myself for one month. And now again in May 2019 with my boyfriend for another month. All of those experiences have been completely different. Thailand offers something for most people. Every place is different. If you are looking for some beach time head to the south. If you love the mountains head to the north of Thailand. 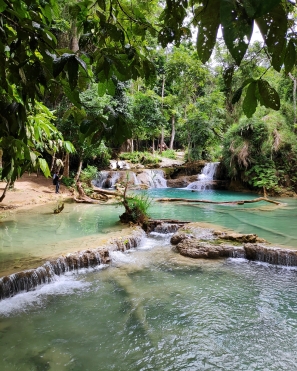 Laos changed a lot between my two visits in July 2015 and June 2019. First, the road improved a lot. So what used to take 6-7 hours is now 4 hours. In Vang Vieng are now a few very luxurious hotels and the plants and flowers in the restaurants in Luang Prabang are now much bigger. I was excited to see what else changed and improved, and for the first time I felt like I could live in Luang Prabang. The expats who have a business in Luang Prabang pay quite high taxes. Somehow they could make sure that some of this money gets used for environmental issues. Recycling is strongly promoted and the streets are much cleaner now than most places in Asia.

In June 2015 I visited Cambodia for the first time. I stayed in Siem Reap for my whole visit. This time in 2019 Chris and I only visited the capital, Phnom Penh, where I finally visited the Genocide Museum. Not an enjoyable activity, but an important one to gain a better understanding of Cambodia’s dark recent history (1975 – 1979). Nearly a quarter of Cambodia’s population got killed.